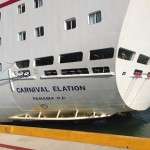 In case you don’t already know, my girlfriend and I took a cruise at the end of October. I already shared the financial cost of the cruise in my Cruise Cost Breakdown post, in this post I am sharing my general thoughts about the cruise. Since this was my first cruise I can’t compare this cruise to any other cruises.  Any comparisons will be to other similar vacation options.

We had an interior cabin which was the cheapest option.  Several people had told me that the room would be really small.  The room was indeed quite small, but it was as big as it needed to be.  The size of the room was not an issue for me.  The lack of a window also was not a big deal.  I think a window might have actually been a negative since looking out through the window probably would have made me queasy.

The room was a little outdated.  It was apparent that the room fixtures hadn’t been changed out in a long time.  The TV cabinet was made to hold a tube TV and now held a flat screen TV.  The closet had been broken at some point and the repair job was rather apparent.  The king size bed was two twin beds pushed together.  The bed was very comfortable as long as you didn’t roll into the middle of the bed.  None of these things were a big deal and not unexpected given that this was basically a budget motel room.

On the plus side, the room was very clean.  Our room attendant was very friendly.  It was really nice to have a clean room when we came back from breakfast and to have the bed turned down and a new towel animal when we returned from dinner.  The shower was great.  I was a little worried that the shower pressure would be weak given that we were on a ship.  The shower actually had better shower pressure than our shower at home and the water was piping hot.   The endless hot water led to me taking even longer showers than usual which makes for some pretty long showers.  I do love my showers and the shower was one of my favorite parts of the cruise.

Whenever I mentioned that I was going on a cruise, previous cruise goers always talked about the variety and quantity of food available on a cruise.   The food on the cruise was okay, but I can’t say I was impressed by it.  Many people telling me about their cruises commented on how much they liked that food was available 24 hours a day.  That doesn’t seem like a big deal to me since if you live in a city with 24 hour drive-thrus and grocery stores you also have food available 24 hours a day. It isn’t too hard for me to indulge my food cravings at home anytime of day so the cruise didn’t seem like that big of a difference to me.  The main difference is that on the cruise you don’t have to directly pay for each meal.  The first night I wanted to get a late night snack around 11pm and all the restaurants were closed.  My free food options were self-serve ice cream or pizza. There was a long line for pizza so I chose to forego my late night snack.    The fact that I didn’t gain any weight on the cruise shows that I didn’t indulge anymore than normal.  Of course, my normal level of indulgence is pretty high so it might be hard for it to get any worse.

We did make it a point to eat in the dining room every night.  I tried to expand my palate a little by having a different item every night and only had my default burger one night.  The menu featured a different “exotic” appetizer choice every night.  The options I remember were frog legs, snails, sushi, alligator.  Since I’d had sushi before and didn’t like it, I didn’t try it again. Growing up in the Ozarks, I’d also had frog legs several times when I was a kid and didn’t have any desire to have them again.  I’d never had snails, but I still didn’t want to try them.  The only exotic appetizer I tried was the alligator.  It had so much breading and seasoning though that I couldn’t even taste any alligator.

The servers provided excellent service and also provided entertainment with a short song and dance routine towards the end of mealtime.  Even though eating in the dining room was a nice experience I probably would have been happier just eating from the buffet most nights.  My favorite meals were the cheeseburger and fries I had for lunch everyday.  I even liked the buffet burger better than the dining room burger.  I guess my unrefined palate just prefers the cheap food so I don’t really get an added value from the fancier food.

This post is already long enough so I will finish writing about my thoughts on my first cruise in Wednesday’s post.