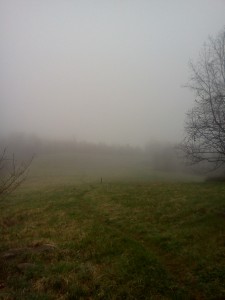 This post isn’t too timely since it has been almost a month since I returned from my hike.  But I need to write something since I’ve been neglecting the blog and this is what I have been wanting to write about so here it is.

My hike lasted two weeks and I ended up hiking about 130 miles.  The trip was quite a bit more expensive than I planned on it being and although I enjoyed the trip I now wish I would have just hiked on local trails to keep costs down rather than traveling to the Appalachian Trail.

My main mode of transportation to and from the trail was Amtrak.  Last year was the first time I ever rode a train and now that I have tried it I am a fan of train travel.  One of the main advantages of taking the train for this trip was that the train stopped in the town I was starting my hike at.  If I had flown I would have had to taken a bus or taxi from the airport to the train station and then taken the train to my final destination.  Logistics were much easier just taking the train.  The other advantage was that the train was cheaper.  The main drawback to the train is that it takes a lot longer but that wasn’t a problem for me.

On the way back there was a large gap between when the train arrived in Chicago and when the next train left for St.  Louis.  Rather than wait around in the train station all day I decided to try the Megabus.  It was only $14 for the Chicago to St. Louis trip.  That was about half the price of the train and much cheaper than flying or driving.  The bus was full and the seats are much smaller than on the train.  Combine that with the fact that they had the heat cranked up way too hot and I was quite uncomfortable for the beginning of the trip.  Once the bus was on the highway they finally turned the heat down a little and I got used to the close quarters the trip was reasonably comfortable.   The bus only had one scheduled stop plus a rest stop for the trip which was enough stops for me.  The trip took about six hours and that is about as long a trip I’m willing to take on the bus.  I’d take the bus again if the time and money savings were enough but I think it is definitely worth paying some extra money for the train.

I’ve always enjoyed the hiking part more than the camping part but I do enjoy the camping for a few days.  On this trip I tried my new Eureka! Solitaire Tent and was quite pleased with it.  I camped all night in the rain and it managed to keep the moisture out which is better than any of my previous tents have done.  This gives me more confidence in passing up the shelters and just stopping wherever I want for the day.  My next gear purchase needs to be an air sleeping pad since my thin camping pad is no longer comfortable.  With that combination it should be easier to pass up the hotels.

I hiked from Harpers Ferry to the southern end of Shenandoah National Park.  There was beautiful scenery and the hiking was mostly nice.  There were a couple of days that it was uncomfortably hot but otherwise it was pretty good hiking weather.  I thought by hiking in March I could avoid the bugs but they were already out.  On the uncomfortably warm days they were swarming me.  They were still around but not bothersome on the other days.  I did get a couple of tick bites even though I took precautions against them.  I have felt more fatigued than usual since returning from my hike and will be seeing a doctor to make sure I don’t have Lyme disease.

One benefit of the hike was that I was able to get my weight under 220 pounds for the first time in a year or so.  Walking ten miles a day with thirty pounds on your back and only eating the food you carry does help with weight loss. I have been staying at about the same weight since I’ve been back from the hike but that won’t last since I’m no longer exercising and have returned to my normal eating habits.  I have to start exercising again and eating better so I can get back to losing weight.

Hiking is a cheap recreational activity if you do it right. On the days I didn’t stay in a hotel or go to town my only cost was the about $2 a day of food I ate.  On a longer trip I’d probably be eating more food but in the short term hiking kills my appetite.  If one can manage to keep the hotel and restaurant visits to a minimum it would be possible to hike for less than $5 a day.  That is easier said than but I do dream of trying it some day.

For now I plan on doing more local hikes and getting my hiking fix that way.