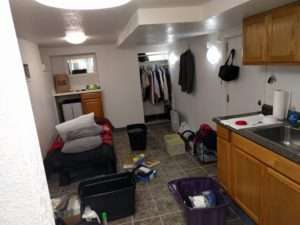 Last Sunday I moved into this tiny apartment. The landlord stated that it that measures about 150 square feet and I think that is probably about right. It is definitely a small apartment. I’m posting a couple of pictures to show how small it is. The first picture was taken while standing in the bathroom area and viewing the kitchen/bedroom/living room area. The apartment is still a mess in these pictures. I don’t own very much stuff, but it still took quite a while to get it organized and squared away in this tiny apartment.

The apartment is a bargain at $435 a month including utilities. The only thing I will have to pay for in addition to the rent is internet.  The city I live in has a good deal, where you pay a $300 installation fee and then have free 100mb internet for life. Even if I only stay in the apartment a year that will only be $25 a month. If I stay longer the internet gets to be more and more of a bargain. The drawback to the free internet is that customer service is lacking and they don’t appear to be in any hurry to get my internet installed or even tell me when it might be installed. I haven’t been posting much the last few months, but this month I have a reasonable excuse for not posting too much.  Once the internet is installed I plan to post on a more regular basis and hopefully revive the blog a little bit.

The apartment is a great bargain. You can’t find an apartment close to that cheap in this area of Kansas City. Of course, the apartment being that cheap means there are a few drawbacks to the apartment. The size would probably be the biggest drawback for most people. I’m okay with the size. I actually like living in small spaces. The biggest drawback for me is that it is a basement apartment which leads to it smelling musty and having more insects than I like.  I’m working on both of those problems. I’ve got some air fresheners to help the place smell better. I’m cleaning which will hopefully lead to fewer bugs. I think some of the bugs are here due to the last tenant being messy. The apartment was sprayed before I moved in which I think did significantly reduce the bugs. It appears the bugs were probably much worse before I moved in. If insects continue to be a problem after I have the apartment cleaned and squared away I’ll have it sprayed again. Although I’m complaining about the insects they aren’t that bad. It isn’t like the apartment is infested with cockroaches. There are just a few random, little insects coming into the apartment each day. 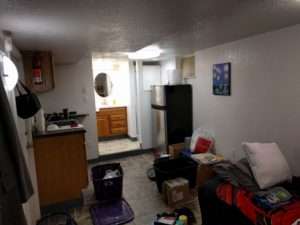 Another drawback is that the apartment doesn’t have a real kitchen. It just has a sink, cabinets, and a refrigerator. I’ve bought a hot plate and toaster oven and I think that will make it enough of a kitchen for me. It doesn’t have a lot of cabinet, but it is plenty for the few dishes I have.

The second picture shows the bathroom area. It has a vanity in the middle, a shower stall on the right, and there is a little toilet cubby on the left side out of view. The toilet cubby does not have a door which could be awkward if I ever had anyone over to the apartment. It did have a curtain rod across the entryway which I hung a shower curtain on so if anyone does come over and need to use the toilet they can have some privacy.

Although this apartment is a bargain it will end up costing me about the same as I was paying my GF for expenses while living in her house. Before anyone asks I will go ahead and say that my GF and I are still together.  Moving out has strained the relationship a bit. It might not have been the smartest move on my part. Time will tell. That is about all I have to say for now. If you have any questions about the apartment ask me in the comments.