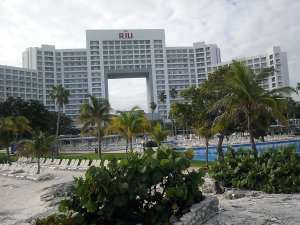 Last month I had a five day vacation in Cancun with my girlfriend and my mom. The vacation was not quite as frugal as I had originally planned, but I do believe it was a bargain for what we got.  And I think we probably paid quite a bit less than most people who had a similar vacation.

The round-trip airfare from Kansas City to Cancun ended up costing about $70 each. The flight was free, but we still had to pay taxes and fees.  The flights were paid for with points I had earned for opening a Southwest credit card and for shopping through the Rapid Rewards shopping portal. I earned enough points this year to qualify for a companion pass. For the rest of this year and all of next year my girlfriend can fly with me for free, I don’t have to use any points for her fare.  If you would like to apply for the Chase Southwest Premier Card you can use my referral link to apply and you can get 2 roundtrip flights on Southwest with 50,000 bonus points once you meet up the easy promotion requirements. Please note that this card does have a $99 annual fee that isn’t waived.  If you use my referral link I’ll earn some points towards a free flight as well.   If that referral link doesn’t work or if you would like a referral email to Rapid Rewards leave me a comment and I’ll get an email out to you.

The flights on Southwest had both good points and bad points.  The good points were that we were able to check our bags for free and both the final leg of the flight to Cancun and the flight leaving Cancun were almost empty.  I believe the flight attendants said there were thirty-some people on the flight.  This was nice since it allowed us to all spread out in our own row. There was also free in-flight TV which helped pass the time.  The bad was that we had flight delays on both the outbound and return trip. They were able to make up a lot of time in the air so we didn’t arrive too much later than the originally scheduled time. Also, there are no direct flights from KC to Cancun which meant long layovers for us.  The flight delays had the effect of making our long layovers a little shorter so I didn’t mind them too much.

We stayed at the Riu Palace Peninsula and the hotel cost was $160 per night. That was more than I prefer to pay, but when you consider it is for three people at an all-inclusive resort it is actually a pretty good deal.  This room would normally cost over $300 a night, we got the much lower rate since my mom is a travel agent. The hotel and grounds were very nice and the view was great.  My big complaint about the hotel room was that the noise from the bands playing in the bar below made it impossible to go to sleep without earplugs.  I wasn’t impressed with the food at all. I thought the food we had on our cruise last year was much better.  We ate at the buffet most nights since you had to reserve the restaurants ahead of time and we were only able to make one reservation. The one night we were able to eat in one of the specialty restaurants was pretty good, but for the price I want every night to be good. Free drinks including alcoholic beverages were also included.  This probably makes the hotel a great deal for drinkers.  Since neither my GF or I drinks very much this didn’t really provide us with much value.  I did have a few frozen drinks while lounging by the pool. They tasted great, but I don’t think they had much alcohol since I never got even slightly buzzed and I’m a lightweight drinker.

The highlight of our trip was the visit to Xplor.  This is a theme park with zip lining, amphibious vehicles, rafting and swimming in underwater caves.  We were able to do the zip lining, amphibious vehicles, and swimming in the underwater cave and I enjoyed them all.  Since we explored the park at a leisurely pace we didn’t get to do everything.  I would have liked to have had more time at the park.  The park package included transportation by bus to and from the park which kept us from having the whole day in the park.  The park was a lot of fun.  The price of $135 was a little high, but I think it was a worthwhile vacation splurge.

The total cost of the trip came to about $600 each which is a pretty good deal for round-trip airfare for three and three people for four nights at an upscale all-inclusive resort.  I don’t think I would do a similar trip again, but I did enjoy it and I’m glad we were able to go.