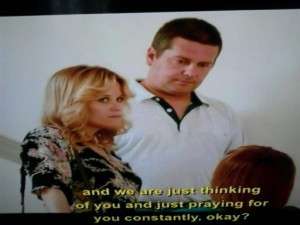 If you have been reading this blog for a while you might remember a post I wrote back in 2012 about being an extra in the movie, “Devil’s Knot” and meeting Reese Witherspoon.  I’m not very good at tooting my own horn because the movie finally came out in May of this year and I’m just now getting around to writing about the release of the movie.  I also thought I had previously written a post on how to get a job as a movie extra, but I can’t find such a post.  I’ll be writing a post on that topic soon.

When the movie finally came out I was pleased to see that I had some camera time. Although, I was right next to Reese Witherspoon in a couple of scenes I still wasn’t sure if I’d be viewable in the movie.  The scenes I was in could have been cut from the movie or cropped so that I wasn’t in the scene or I could have just been so far in the background or the scene shown so quickly that you could barely recognize me. As you can see from the photo in this post I got lucky and have a scene that basically features just me and Reese on the entire screen.  I’ve been an extra in a couple of movies before so I know it isn’t usual to get a scene where you are seen with the star.  In the other movies I worked as an extra on I was either totally unseen or only visible for a brief moment in the background so I’m pretty happy that I had such a highly visible scene in this movie.

If you want to check out the movie it is on Netflix right now.  I used my phone to take a picture of the movie playing on Netflix on our TV for this post.  My most visible scene is at about 1:21 into the movie where I can be viewed sitting in the courtroom next to Reese Witherspoon and then standing by her in the hallway a short time later. I’ve also been able to spot myself in the background a few other places in the movie, but I doubt anyone who doesn’t personally know me would be able to spot me in any of those scenes.  The movie is a dramatization of the trial of the West Memphis 3.  If you aren’t already aware of this case it is a pretty interesting story.

6 thoughts on “My Movie Scene with Reese Witherspoon”