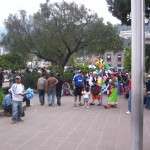 This post is a quick overview of the trip I took through Central America this month. I’ll have more posts that address specific issues over the next week or two. There will also be some PF type posts so you hopefully won’t get too bored with the travel posts.

I spent the first two weeks of my trip in Xela, Guatemala. After flying into Guatemala City I took a taxi straight to the bus station and then took a bus to Xela. I’ve always found it kind of funny that the ten minute taxi ride from the airport to the bus station costs about twice as much as the the 4 1/2 hour bus ride to Xela. The cost of a first-class bus ticket was about $8. The buses are about the same as Greyhound but more pleasant to ride on then Greyhound so I consider this a good deal.

Once in Xela I got myself a $4 a night hotel room. This hotel was $4 when I first stayed there in 1997 and it is still $4 now. It is nice to see that some things aren’t affected by inflation. A $4 room is very basic and you have a shared bathroom but at this hotel the rooms are clean and I couldn’t really expect much more for $4.

My next task was to find somewhere to stay long term. There are plenty of places available that will rent to you on a long term basis. My first option was Casa International but it was booked up so I had to find a different place to stay. I would have preferred to stay at CI since I had stayed there before and liked it and it was only $85 a month but you can’t reserve a room so you have to take your chances when you show up.

I ended up getting a room in the Don Diego Hostel for about $100 a month. This is a decent hostel and it is located fairly close to Parque Central so I was ok with the price. I could have saved some money by staying with a local family but I prefer to have more privacy than that. There were also nicer places that would have cost more as well as other similar places with similar prices. If I would have searched more I probably could have found a slightly better deal. I was more interested in getting settled than finding the absolute best deal though.

After my first two weeks I decided I wanted to travel more and took the Tica Bus from Guatemala City, Guatemala to Panama City, Panama. The trip took three days with one overnight stop in El Salvador. I’ll write a separate post about my bus experience.

The trip concluded with a one week stay in Panama City, Panama. I was going to take the Tica Bus back from Panama to Guatemala but I was able to change my airfare at a low cost in Panama so I decided to return home from there. I’ll also write more about Panama in a separate post.

I did enjoy my trip in general. It would have been better if I would have just planned on it being a shorter trip in the first place. One thing I did learn from this trip is my tolerance for being uncomfortable is less than it was 10 years ago. I will have to consider that when I plan my next trip.

I have made it to Panama. I will be staying here until I return home next Friday. I was able to change my ticket and fly home from here for only $121. When I get back I will share more details of this trip. This trip was supposed to be much longer but when I am away I miss my GF and home. That should probably tell me something but I´m trying not to hear it.

This is just a quick note to update you on my new plans. I´ve decided I don´t want to spend a whole month in one place so I´m back on the road again. I´m going to Guatemala City today to buy a bus ticket from there to Panama City and back to Guatemala City again. The bus stops in the capital cities of El Salvador, Nicaragua, and Costa Rica and I can spend however many days I want there and resume my bus trip at a later date using the same ticket. The cost is only $243 round-trip which is a good deal. These buses are much nicer than a Greyhound bus. I´ll post another update when I have internet access and I know more about my future plans.

I will be leaving for Guatemala next week. I thought I would share my travel plans so far although they are subject to change. And like my AT plans they probably will change.

The return date for my plane ticket is at the end of November which would give me three months in Guatemala. I’m now unsure if I want to be gone that long. I’ll make up my mind after I’ve been there for a while. Changing my ticket will likely cost me more than the original cost of my ticket but maybe I’ll be able to find a good deal.

One of the reasons I wanted to visit Guatemala was to prove to myself that I could live on my online income if I were living in a low-cost country. Based on my past experience living in Guatemala I think this is entirely possible. When I’m traveling my expenses will be higher but when I’m just relaxing in Guatemala my monthly expenses should be very low. That is why I want to spend at least one month just staying put in Guatemala.

I will need to find something to occupy my time while I am in Guatemala. I’ve decided not to take my laptop since internet access is widely available and cheap. This will be a little inconvenient since I plan to do a lot of writing while I’m there and I’ll have to visit an internet cafe any time I want to write. I suppose I could just write longhand in my room and transcribe what I’ve written later but that seems like too much trouble. The fact that I have a hard time reading my own handwriting makes that even more of a pain. One way or another I will get some writing done. I’ve planned on doing a lot of writing this summer but I haven’t written very much. Once I am in Guatemala I won’t have any more excuses for putting it off.

Another reason for Guatemala is to lose weight. On my past trips to Guatemala I’ve lost 10 pounds a month without trying. This time I will be trying which will hopefully lead to even better results. I plan to exercise regularly. If I can rent a place with kitchen facilities I plan on preparing almost all of my meals. That should help keep my expenses down and help me lose weight.

My flight to Guatemala leaves Wednesday morning but my flight from Kansas City arrives Tuesday just before midnight. In a strange coincidence my best friend is also going to be staying in Miami at that time. I considered sharing a hotel room with him for the night. The problem is that there is no public transportation at the time I arrive and taking a taxi to the hotel would likely cost more than the hotel room. I can’t justify the cost and plan to just stay at the airport. According to Sleeping in Airports it should be doable.

I’ll let you know how it works after I arrive in Guatemala. My flight arrives in Guatemala at about noon but I have a 4-hour bus ride to my final destination of Xela so I probably won’t get online that day. I plan to have an update from Guatemala on Thursday. There will be a couple more posts before I leave also.