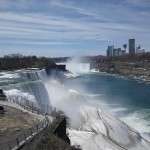 After the end of tax season my GF and I took a weekend vacation to Niagara Falls. If you have been reading this blog for very long then you know we did not spend very much on this vacation. Our total spent for three nights hotel, two round-trip tickets from KC to Buffalo, three days car rental, and admission to several attractions came to just a little over $200. This post will explain how I managed to keep the cost of the vacation so low.

The airfare was basically free. I still had lots of Rapid Reward points left over from signing up for two Chase Southwest credit cards last year which allowed me to book my flight for free. I also earned a companion pass last year which allows my GF to fly for free with me as well.  This is pretty nice since we get double the value out of my points.  The only thing I had to pay for the two round-trip flights was the tax of $5.60 on each flight each way.

The hotel room was completely free. I received 25,000 Starwood points for signing up for the SPG American Express card and meeting the spending requirement earlier this year. Three nights at the hotel used up 10,000 of those points. We stayed three nights at the Four Points by Sheraton in Niagara Falls, NY.  The room was pretty nice by my standards. It was a little smaller than our room at Excalibur, but much newer and a little fancier than Excalibur. From reading reviews of the hotel I knew to request a river view room and I’m glad I did. We wouldn’t have gotten the river view otherwise and it was a great view. The hotel had free cookies by the front desk which were delicious and a nice perk for staying there. The hotel was about five miles from the Falls, which wasn’t a big deal since we had a rental car. If we ever go to the Falls again I’d probably get a hotel on the Canadian side though.

As you might have guessed, our main reason for visiting Niagara Falls was to see the Falls. The first day we went to Niagara Falls State Park and did some sightseeing there. A plus to being early in the season is that we didn’t have to pay for admission to the park or for parking. Also, it was not at all crowded. The minus is that some parts of the park were off-limits due to being covered in snow and ice so we couldn’t get quite as close to the Falls as we would have been able to later in the year. Also, the Cave of the Winds tour and Maid of the Mist boat ride were not yet operating. At the park we were able to view the American Falls and Bridal Veil Falls from Goat Island and we also walked on the bridges to the Three Sisters islands and observed the rapids above the Falls.

The next day we headed to Canada to observe the Falls from the Canadian side and to visit some tourist attractions.  It was also the first time either one of us had been to Canada so we were excited to visit Canada for the first time also. The previous day I had bought us two Wonder Passes which included tickets to Niagara Fury, Journey Behind the Falls, the Butterfly Conservatory, and 24 hour passes for the WEGO bus system. The tickets were $19.95 Canadian each which I think is a great bargain. The visit to Journey Behind the Falls was worth that much all by itself. This was another plus to coming early in the season as Wonder Passes are only available in the off-season. The view of the Falls the previous day was awesome but seeing the Falls from the Canadian side is much more awesome. This post is already getting unwieldy so I won’t go into detail about everything we did. I will highly recommend going on the Journey Behind the Falls tour. You actually do journey behind the Falls. There are tunnels dug behind the Falls and you get to walk through the tunnels and observe the Falls from behind the Falls at a couple of different windows. There is also an observation deck where you can view the Falls outside at a pretty close range.

We both really enjoyed our visit to Niagara Falls and will probably go again sometime. On the next visit I would plan to stay on the Canadian side since the view is much better from there and most of the attractions I’d want to see are there also. A lot of the American side seems to be run-down and the roads are in terrible condition. The next trip we would also like to explore a little further into Canada. We didn’t feel like we experienced much Canadian culture in Niagara Falls since it was pretty similar to any other tourist town. Is there anything else you would like to know about our Niagara Falls vacation? If you’ve been to the Falls before do you have any suggestions on what we should do on our next trip?