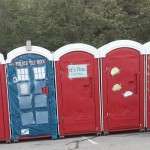 My plan to bike the Katy Trail did not work out as I had hoped. I started my ride last Tuesday and on that day biked a total of 19 miles in five hours. That is very slow for biking on a mostly level path. Just doing that amount wore me out. It was mostly overcast and windy, but I was still sweating and had to take a lot of breaks. Once the ride was over and I saw how long it took me it was obvious that either the bike (borrowed from my girlfriend) or me wasn’t up to the challenge of riding the Katy Trail.

I ended up getting a hotel room that night since it ended up being too cold to sleep in my car as I had brought my summer sleeping bag expecting warmer temperatures. Also, my legs were really hurting me and I thought sleeping in a comfortable bed rather than a piece of plywood in the back of my car might help ease the pain. In over 1000 miles of hiking on the Appalachian Trail I never took a pain reliever due to aching muscles, but on that night I had to take some aspirin to reduce the pain so I could sleep.

After taking the next day off to recover I tried the trail again on a rented bike. I figured this would show me whether it was me or the bike that made the previous ride so difficult. It didn’t take long to realize it had been my bike that was causing the problems. I rode 13 miles in 2 1/4 hours on the rented bike. It was much easier and much more enjoyable riding on the rented bike.

Since I didn’t want to rent a bike for long enough to ride the entire trail I came up with a new plan. I decided to return to KC and buy a better bike. I was lucky that there were lots of garage sales on the weekend and I ended up buying a Trek mountain bike for $15. It is a bit beat up and rusty from being in storage for a long time, but a test ride has already shown that it is much better than my girlfriend’s bike. I plan to return to the Katy Trail at the beginning of June.

When I took a day off after my bad biking day on the Katy Trail I got very lazy. I didn’t do any writing and I ate lots of bad food. This resulted in me gaining two pounds and getting out of my writing habit. After seeing my weight gain I’ve once again started eating better and exercising everyday. Today is my first day of getting back to my writing. I plan on having a long streak of days that I meet my exercise and writing goals.