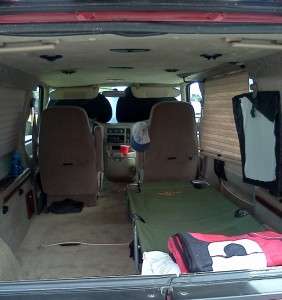 I haven’t had an update on my van customization for a while.  That is mainly because I haven’t done much to it due to a lack of funds.  From the picture you should be able to see that in addition to removing the back two captains chairs I have also removed the back bench seat.  Since I wasn’t using that seat it was just taking up room and adding weight.  Removing it  has opened up a lot more room in the van.  The Safari is a minivan so I need all the room I can get.

The other customization that I have finished is making panels for the windows.  I made some of the panels out of Reflectix insulation, which is basically bubble wrap covered in aluminum foil. Since I didn’t want the shiny surface showing I taped black plastic over the insulation. Then I just tucked the panels into the windows. It fits in snugly and is tucked into the crevices around the window.  From the outside it just looks like a darkly tinted window.  In certain lighting conditions you can see the wrinkles in the plastic since I didn’t do a great job of taping the plastic over the insulation. I have a picture below which makes my taping job look even worse than it is.  The insulation does fit the window tightly even though it looks loose.

I also used white foam board covered in black plastic for one of the windows.  It works well for blocking the sun, but it probably doesn’t insulate as well as the Reflectix.  After I had made all of the panels I found out that they make black foam board.  If I were to do it all over again I would probably make the panels from the black foam board so I could skip having to cover them in black plastic and I wouldn’t have to worry about any wrinkles in the plastic. It would be a much easier process although it would be more expensive. 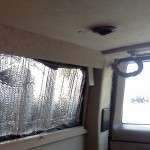 I’m using a black tablecloth from the dollar store as a divider between the cab of the van and the back.  It works ok but it won’t hold up for too long.  I will eventually get some black fabric or possibly a tarp to hang up behind the seats, but that will have to wait until I have more money.  I also need to get something to hang over the window of the sliding door.  Since the window in the door opens I can’t put a panel in it.

I’d like to build a bed for the van.  It would be more comfortable than the cot and since it would be affixed to the van it wouldn’t slide around like the cot sometimes does.  The materials required to build the bed wouldn’t cost that much.  The bigger expense would be buying a mattress for the bed.  I’m planing to tackle this project sometime next month if I have the funds.

The only other thing I might do is buy a cooler for the van.  Since it would allow me to buy fresh foods it might save me some money compared to eating out all the time.  I’d also have to buy ice though so I’m not sure how much money it would actually save me.  Whether it saves me money or not I will eventually get a cooler just so I’ll have more food options.

Farther into the future I’d like to buy a Fan-Tastic Fan for the van. It is getting way too hot and I think a fan would make a lot of difference. I’d also like to add another battery to run 12v devices. Both of those things require more expertise and money than I currently have so they will have to wait a while.