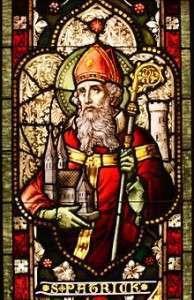 Saint Patrick began life sometime late in the 4th century in Britain as Maewyn Succat. Young Maewyn was kidnapped, taken to Ireland, and forced to herd sheep there. He turned to his faith for comfort, and eventually escaped. After he became a priest in France, he returned to the country he had known as a slave, and converted many of its inhabitants to Christianity. His name changed to “St. Patrick” only after he was ordained as a bishop.

There are many tales about this gentle saint, including chasing all the snakes out (oops – Ireland didn’t have many to begin with!) and having his staff burst into flower. They may have been miraculous, but two letters he wrote still exist, as well as many accounts of his work. After his death, his Irish converts set aside March 17 (most probably his death date, not his birth day) to celebrate his life…and the arrival of Christianity to their shores. Eventually the holiday became one of feasting and drinking, which it remains today.

The Irish immigrated to America in droves in the 1840s, after Ireland’s great famine, or “An drochshaol,” bad times. (They endured a similar famine in the 1740s which destroyed their potato crop. More in a bit.)  There’s a reason why so many railroaders and Western settlers were Irish — they weren’t always welcome elsewhere in the country. Immigrants were stuffed into slums and forced to work in sweatshops back East. More than one source attributes the popularity of St. Patrick’s Day parades in America beginning as protest marches against poor working and living conditions!

Today’s St. Patrick’s Day celebrations may include a visit to a parade — especially in Downpatrick, Ireland, where Patrick is thought to be buried. (Think about that name.) Or celebrate the good saint’s holy day in other ways:

*Wear green. But remember — St. Patrick’s Day is technically a Catholic holiday. If you’re Protestant by inclination, feel free to add some orange, or wear it instead. (Just plan on being pinched…another interesting side effect of the holiday.)

*Pin on a shamrock. Patrick used the three leaves of this greenery to illustrate the Trinity. (Four leaves, of course, are good luck — when you can find them.)

*Have a drink. Skip the green beer and go straight for Guinness stout, a ‘hoppy’ thick dark brew that’s a snack, as much as alcohol. Or sip an Irish whiskey, said to be the oldest in the world — Bushmills, Tullamore Dew or Jameson are a few possibles. A pot of dark Irish Breakfast tea may console the teetotaler. (Milk, please.)

*Enjoy a meal. Corned beef and cabbage, the traditional U.S. response, are really more American than not, though the Irish do enjoy a beef boiled dinner.

You might consider colcannon (potatoes and cabbage) or boxtie (boxty – potato pancakes) on your dinner table. They’re a strong tie to the vegetable that fed a nation until its blight – and the resulting Great Famine.

Or try a Dublin coddle, a mixed dish of ham, sausage, potatoes and onion. It’s easy, filling, and costs little to make.  “Coddling,” by the way, refers to keeping the dish at a gentle simmer. Use a crockpot instead, if you’re headed to the pub for the afternoon.

Put all but the broth in a large saucepan or oven-proof dish. Add enough broth to barely cover the contents. Cover and simmer on low for about an hour, until the liquid is about half gone, and everything is tender. (Take the lid off, if needed, to help the broth reduce even more.) Serve hot with the vegetables on top. Makes about 8 servings.

This recipe was adapted from one on About.com. You’ll find a whole shelf of Irish dishes there, including crubeen (pig’s feet!) and bangers (sausages). Go here for a full list and related links.


My holiday cooking blog will also be featuring Irish dishes until the 17th, including tea brack (a sort of fruit cobbler) and of course, Irish soda bread. And finally:

*Sing a song, tell a story, or say a blessing. My own Irish forebears had the knack for writing; one grandpa sent letters to his children all in rhyming verse. (My cousin believed the gift was accompanied by ‘kenning,’ or sensing things. Who knows.) There’s no nicer way to end a lovely St. Patrick’s Day by reciting this famous blessing:

May the road rise up to meet you, may the wind be ever at your back. May the sun shine warm upon your face and the rain fall softly on your fields.


And until we meet again, may God hold you in the hollow of His hand.

This post is by staff writer Cindy Brick. Cindy is a quilting expert with several published books on the subject and has also had many published articles on a variety of subjects. You can visit her business website at CindyBrick.com or visit her personal blog.