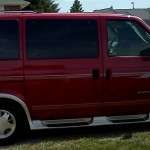 I went ahead and paid off my van today.  Paying it off left me with very little money in my checking account.  That won’t last long though because I have a paycheck to pick up tomorrow and another one to pick up next Monday.  My part-time job and full-time job pay on different weeks so I will have a check every week.

After paying off the van I spent the day putting the seats and TV/VCR unit back in the van.  This shouldn’t have been too big a job but it ended up taking me several hours.  After I installed the bucket seats I realized they were in the wrong spots and needed to be switch.  Luckily, these seats have a quick release lever on them and I was able to switch them in just a few minutes.

The big time waste was looking for an attachment for the seat belt shoulder harness.  I spent about an hour looking through the storage shed for them.  I finally gave up and decided to see if I could still make the seat belts work without the attachment. I then realized that I had never actually removed the attachments.  It just looked like one of the attachments was gone because it was missing its plastic cover. I then remembered that the plastic cover was missing when I bought the van.  I wish I would  have remembered that an hour earlier.

Now I need to look for a car.  The car search process will have to be done during my lunch and after work which could make it take a while.  Having my van paid off should make the process easier.  I can either trade it towards a vehicle or sell it separately, depending on which works best.  I’m hoping I can find a car for about the price of my van because I don’t want to go back into debt.  If I do have to spend a little more money I will.  If I were to replace my van with a car getting 30 MPG I would save about $180 a month on gas based on a gas price of $3.25 a gallon. *  Part of that savings could go towards a loan payment for a short time.

*Gas is currently $3.41 a gallon where I live, $3.29 a gallon in KC, and just $3.07 a gallon in Harrisonville, MO.  I fill up my tank in Harrisonville on my way to KC and on my way back south.  I’m not sure why their gas is so much cheaper than everywhere else but I like that it is saving me money.